CONFIRMED! Get the passport ready.

All that's left is to sign the papers. I've just been hired to be the commentator of the IBA Bodyboarding World Tour. Excited? Hell yeah! Canary Islands, Australia, Mexico, Chile, Hawaii... oh man, it's like the good old pro bodyboarding days. But now, I have to figure out how the heck to get my wife on a few or all of these trips. We'll see.

As for the IBA World Tour... first stop, Canary Islands for the RedBull.com/tv El Fronton event. If you don't know about the wave, El Fronton, you are in for a treat. We will have a 10 day window to run a special four hour invite only battle in one of the craziest waves on the planet.

If you haven't added me on Twitter, please do so now. I'll be sending out Tweets from the Canary Islands: www.twitter.com/mannyvmedia

So join me around the world for some good times, great competitions and cool features. 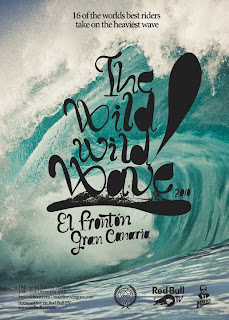 Today was the day that southern California was going to get pounded by a massive northwest swell. I think I stressed out more on 'where to go' rather than 'will I survive'?!

At the very last minute, I texted SUP ripper Sean Poynter and asked if he was down to charge Baja Mexico. He answered without hesitation... yeah, let's do it.

I knew of a couple friends that may be down there; Fowler and his crew and my other friends Nelz and Ross on the jet ski. More people to shoot, the merrier.

After a short 40 minute drive from downtown San Diego area, we arrived on the beach just south of the Mexican border. Sean and I tripped out how drastic the scenery can get with such a short drive. We paid our 27 pesos at the toll booth and then took one of the next exits. We rolled Volvo wagon through these cool white arches and bam... got front row parking. I could see jet skis out in the line up so I asked Sean to head down and get a better look on the conditions. While I was chillin' talking to the parking lot slash security guard, I was able to pawn off the stuff I was supposed to take to the thrift store. So the guy scored on cat hair-covered pillows and old National Geographic magazines.

Sean runs back up and says it's a go. We both suit up and I told him to meet me in the water. Don't want him to wait while I get my camera gear ready. Within five minutes, my Canon 7D with the Tokina 10-17mm was sitting snug in my SPL waterhousing and the HD GoPro was clipped in and ready! Yes, Cha Cha is ready to rock.

It wasn't until I got onto the sand that I realized how big it was and how much the current was pulling south. I ran up the beach a little more to end up where I needed to. I must've timed it perfect 'cuz it didn't take me that long to get out and no sets came to smash me. Wooow.

Ross and Nelz were out on the ski but no sign of Folwer. Sean and I hooked up on a few tube shots after battling the current. Luckily for us, Ross picked us up on the ski and hauled us back down to the starting point. Unreal! I should call him all the tim! : ) Sean and I drifted once again down the beach but this time, we saw Nelz doing step offs on massive set waves. There was this one wave that he pulled in to that... oh man... this thing was a cavern! It was insanely big. I didn't know that Nelz was charging this kind of stuff. He held on as long as he could in the barrel until the shock wave sent him into a forward somersault. His body was fully extended and he wasn't touching water! It was insane!

So huge respects to Sean for charging his 6'6" SUP Starboard and Nelz for going big. Big respects. Oh yeah... and respects to Cha Cha for holding tough!

Here's a few photos and video clips of the morning. Check all the photos (except Sean Poynter's solid ones... those are going to the mags) go to:
MannyVPhoto.com