Last Friday has to go down as one of the toughest labor intense days I've had in a long time. I know I may sound like a wimp to some of you that do this kind of sh!t everyday but... man.

As you know, I've been working at Creed SUP for almost two months now and since the first day, we've been waiting for a container of 150 sup boards to show up. Little did I know, that day would come sooner than later.

Last Friday a diesel truck rolled up and it was go time. We had only two hours to unload 150 30-40 pound boxes. I have to give the owner of Creed SUP, Randy, huge props. He has done this before and man-handled the boxes like no other. He got up inside the container and unloaded every single box while three of use picked up the boxes and stacked them in the warehouse. My arms are just getting back to normal three days later.

After the unloading that we did in record time, we had to ship out as many as we could for the Friday cut off. So we had to move and load on top of that. Hectic.

Dreading the next container to arrive in the next couple weeks? Nah, I know what to expect now. But I know I'll be hurting aftwards.

Time for some waves. Peace out.

Funny thing happened this morning. I went to a local news stand in search of the new Stand Up Journal magazine. I was ready to fork over about $15 for the latest issue. I got the cover shot of Sean Poynter. Yes, I'm pumped. But when I showed up, the mag was nowhere to be seen.

What I did see it was Riptide magazine front and center. I did a double take on the price tag of 15 dollars and realized I had no problem dropping that for an SUP mag. I picked up the Riptide magazine and headed straight for the check out counter.

Sure, the editors would hook me up if I email them for a free issue but the way I see it, and have said it in the past... support those that support you.

Here's to bodyboarding. You've got my full support. 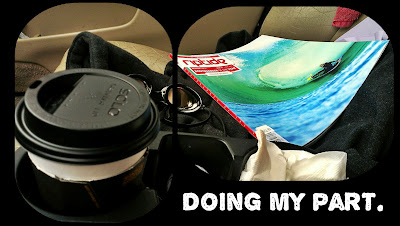