This was the second full day of the trip. Aside from the four bodyboarders that hit the dawn patrol the day before, everyone was jonesing to get in a solid session. 5:30am rolled around and I believe everyone was packed in the two cars and were ready to hit the waves.

I don't like disclosing the location of the beach break that we invade 20 deep but if you look on any map you'll know where we are situated. Because of the way the beach is set up, the waves come in perfect.

With Damian, Billy, Rolando and Roy snapping photos, I headed out to get some waves for myself. It was glassy with two to three footers rolling in. I love bringing our own crowds to empty breaks. We are all out there to have a good time and aside from one or maybe two people, everyone was sharing waves and enjoying everything going on.


I do have to admit... the 15-20 minute walk in the early humidity to the break and the same walk with the same humidity but with added blazing sun really sucks ass. It's a hike. I think that's has to something to do with the break being empty every time. I would do that walk for empty perfection any day of the week.

As I was going through photos of day three of Cabo Freak Fest, it hit me. I have to gear up for another Cabo adventure... Cabo SUP Surf! For now, peep what's coming in October. http://supmex.com/index.php/sup-surf-adventures/cabo-sup-surf

Day number one of Cabo Freak Fest is all about settling in and getting situated. With months of planning, I know that our transport company (www.dannyboycabo.com) will be there to pick up the crew.
We had half the crew come in a day early. By the smell of alcohol coming off their breath and seeping out of their pores, I knew who they were.
The first night for the entire crew as a whole went down at Baja Brewing Co. just across the street from our hotel. Baja Brewing Co. has the best view of the bay and has the best beer this side of the border. After going over the schedule and meeting the new faces, I was off to bed for an early morning start.
Day number two. 5:30am meet. (Sounds of crickets). After some heavy drinking after the opening speech, I was out. Luckily, the four bodyboarders that were hungry to ride… rode. Rolando, one of our drivers, was there on time and veteran Freak Fester Jay Farjado made the call and said, let’s do this. No photos were taken but from what they said, it was worth it.
Next on the agenda were the afternoon Belly Flop Challenge and some shorebreak action out at Lover’s Beach. We decided to get some barrels and do the Belly Flop Challenge afterwards. Chato is my contact here in San Lucas when I need anything to do with the waters. He called up his buddy and got us a group rate for the boat (Ponga) to take us out to Lover’s. Getting on and off the ponga sounds easy but add waves, loss of perception and everyone wanted to get off at the same time, it’s crazy! We make it to Lover’s Beach. The waves we ride are actually on the other side of Lover’s Beach. The locals call it Divorce Beach. It’s secluded and a place for a secret rendezvouses. What we bodyboarders call it is epic shorebreak with warm water and amazing backdrops.

Walking from Lover’s Beach to Divorce Beach, for me, is the longest walk during the trip. In my mind I have several thoughts going through my mind:
-Are the waves going to be big?
-Does my crew know their limits?
-What is the injury protocol?
-Did I charge my camera batteries?
-Do I have space on my memory cards?
-Who brought the water?
As we come up and over the sand bank, I can finally exhale. The waves were a fun 2-3 and barreling. Wasn’t epic but fun. Plus, it’s a great way for me to gauge who is who in the water. Cameron Steele and I snuck down the beach about 50 yards and within ten minutes we scored three solid shots as if we were doing this shit for years. Wait, we have been. The other water photographers on the trip, Damian Davila and Billy Thiel, hung out by the wall and shot everyone in the water. Our two hour shorey session came to a close. We marched back through the massive rock corridor and got back on the pongas.


One last stop… Pelican Rock, the jump rock. I think most everyone jumped from the rock. Even El Jack. More on El Jack and his lovely lady later. After Carly’s massive dive from the top of the rock and the rest of the crew’s plunges, it was time for the Belly Flop Challenge. Jay was the first to go and couldn’t hold his position long enough and over rotated. Next, Cameron Steele. From the launch from the rock to ankle grab to perfect landing, Cam set the bar. Alex and Josh.0, both couldn’t keep it together. Then Billy Thiel stepped up. The takeoff, the flying time and the landing were all perfect! I thought to myself, how in the f*ck do I top that? As I made my way up the rock from the backside, Josh.0 took a second jump and nailed it. I didn’t see it but it was pretty damn perfect from what I’ve heard. But still there was no way I or anyone could top Billy’s jump. I got on the rock and take a moment to figure out a plan of attack. With hand behind my back, I went for it. Just as I was about to land, I turned my right should in and took the impact on my neck and upper peck. Right then, I knew and the rest of the crew knew Billy Thiel is your Cabo Freak Fest 2013 Belly Flop Champion!
The night was attacked by many but I opted to stay close to home and get in a good night’s sleep.
My photos of the trip will be available to you. Free watermarked and resized images. Plus, if you want to get your hands on the high resolution images for download or print straight from my site, you can purchase as well. Check it: http://www.mannyvphoto.com/Events/2013-Events/Cabo-Freak-Fest-One3
Posted by In The Water at 6:02 AM No comments:

What can I say? I'm trying to report on day one when its day 3. Basically there is not enough time in the day to give you the play by play in real time. So I'll give you the sunrise from today and put something together for you by tomorrow. Wait, as I was sitting here about to press post, Richard and Ellie walked down ready for the Jungle Cruise. Off for more madness. 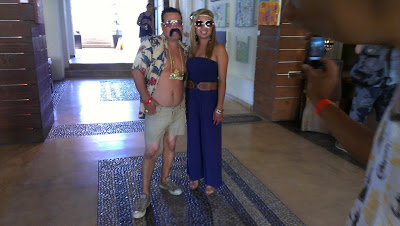 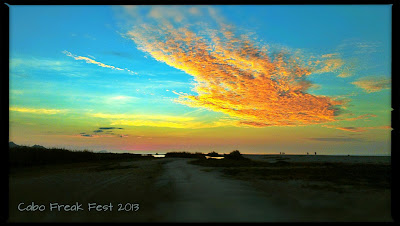 Email ThisBlogThis!Share to TwitterShare to FacebookShare to Pinterest
Labels: #cabofreakfest

Here we go people! The 11th year since it's resurrection, Cabo Freak Fest will go down from August 15th to the 20th. My blog will be the go to place for the play by play of each day on the trip. Somewhere at sometime each day between deep blue barrels and the drunken mayhem, I'll post photos or video clips of the madness that goes down at Cabo Freak Fest One3. Plus, this is the first call out to all the pros looking for a break from the bodyboarding rat race and enjoy all the things that make bodyboarding what it is... fun. Easy as that. Here we go! 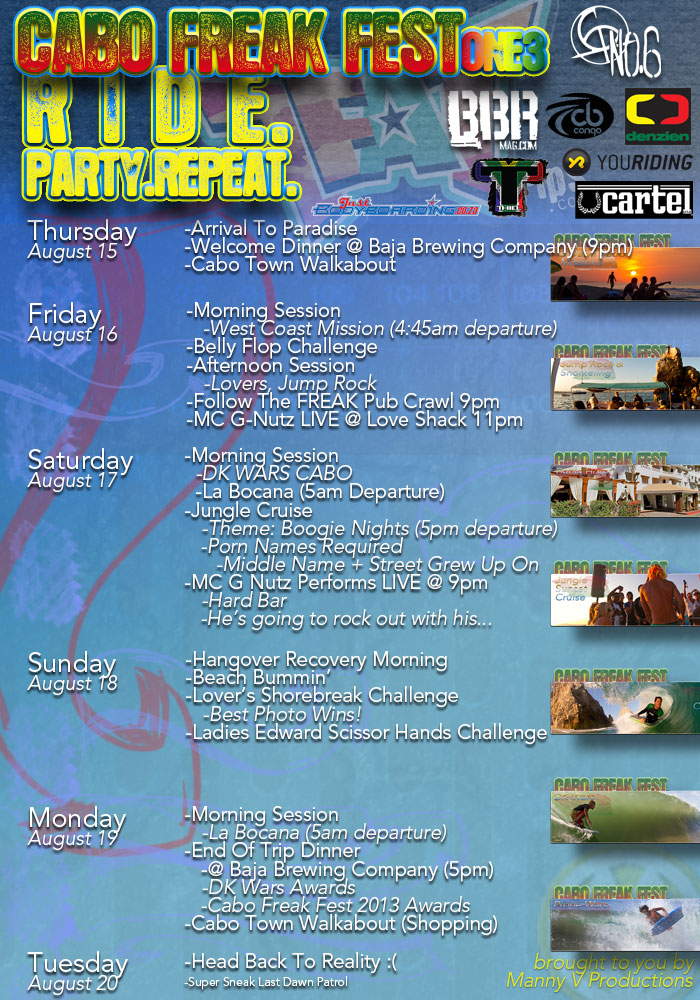 Pixlr is epic. I know there's a ton of apps out there to help your phone photos look that much better. My goto app for this is Pixlr Express. It has it all and more. PLUS... there's a desktop version as well! You can have all the cool things from the app and apply them to your images on your hard drives. That is awesome.

Pixlr falls under the Autodesk company umbrella. Autodesk is known for it's unbelievable software programs; AutoCad and 3ds Max to name a couple. So you know, these people know their sh!te.

Here's a quick run down of what I like about Pixlr Express app. I have yet to play with the desktop version but will soon. Okay, check it:

-Has six different categories of coolness. Each having several types of modifiers: Adjustment, Effect, Overlay, Border, Text and Sticker. Sticker is my favorite because it have the comic word BOOOM!

-Saving: You can save in different sizes including the original size.