Today, the girls were on their own. I took today to catch up on emails and finish up a video I'm editing for Dog Beach Dog Wash. Take a look at the photos and listen in on what the girls did this day:

CLICK HERE to hear the girl's version of what happen. (mp3 audio file)

Getting pitted at Padang, eating vegan food, stretching on Padang Padang beach, Bintangs at Jimmy's Brother and SUPing on Jimbaran Bay... not a bad start for the Indo Experience G1 tour. But that was only the first few days. With the SUP boards still in our possession and time on our hands before we head off to the rain forests of Ubud, we decided to hit up Jimbaran Bay at dawn in hopes of some glassiness for some more SUPing.

The girls were up and ready at 6am and within 25 minutes we were unloading our SUP boards at the same beach from yesterday's SUP Session. But this time, it was sheet glass and not a sole in sight! Awesome! We decided to head towards the west side of the bay and check out the fisherman unloading their overnight catch. I would guestimate about a mile and a half one way. We all won't agree on the distance but I'm saying AT LEAST a mile and a half.

At the mile and a half mark ;), we reached the fisherman waiting to head towards the beach. Okay, now think about it for a second. You're an Indo fisherman who's been out all night fishing and your waiting to get called into shore to unload the catch when all of a sudden you see three girls in bikinis paddle up. This was 7am! Yeah... the girls stirred up a few waves at the fishing village in Jimbaran this morning.

Mailei and Stephanie wanted more exercise and headed out for a swim. Yeah, crazy.

Back to the hotel but not until we stop and get some photos of this giant statue that's on the way to LBS Surf House. Everyone just finds insanely massive. Probably because it is.


Breakfast. Packed. Now, off to Ubud. We check into Artini 2 hotel and I have to admit, walking into the reception area is always breath taking. Actually, Ubud is pretty awesome if you know where to look.

We're checked in and right off the bat we book our seats at the traditional Kecak Fire Dance. This is a definite must for anyone visiting Bali. The show was awesome except for the fact that this little kid two seats down was mimicking everything the lead actor was doing. Annoying. Other than that, it was a very cool sight to see.

After the show, we head down the street to my favorite restaurant in Ubud, KAFE. With nachos on the menu, you know this Mexican will be fine with everything else. Eat. Hit a wall. Sleep.

We started off this day down on Padang Padang beach with a stretching exercise session with Escogue Instructor Mailei. If you have back issues, this is routine you need to follow! After an hour of bending, sweating and a walk down the beach, we were ready for a full day of Bali.


I have to admit, I was a little nervous about having a vegan on the Bali Adventure trip. Just the fact that I didn't know where to find vegan restaurants or what kinda of foods would be considered vegan was making me short circuit as a tour guide. But believe it or not, there hasn't been an issue at all. In fact, vegetarian meals were plentiful and get this... we found an all vegan restaurant on Sunset Road near Kuta. Our friend was excited!

I grew up enjoying and eating every single type of meat on the planet. So having lunch at an all vegan joint was something new for me. Needless to say and just by looking at the photos, this place was awesome! The food was delicious and our table was awesome. It was open air gazebo sitting a grassy field with a fountain making comforting sounds. You could see the rice farmer and cows through the white coated fence. The Deity of Miracle restaurant is a must. Two thumbs up.

With the SUP on the car and food in our bellies, we headed to Jimbaran Bay. After another 20 minutes of the Bali mayhem traffic we reached Jimbaran. The winds were a little on the high side but we still went for it. We got out pretty far pretty quick. Paddling into the winds on the way back took twice as long. After the work out against the wind, we chilled out on the beach. The girls got tan and I took out the different boards and caught a few tiny waves.

Tan, tired and hungry we loaded up the boards and headed for Ulu Thai food near Bingin on the bukit. Yum. This place serves their curries in coconut shells. Pretty cool. The food was awesome but having our waiter hovering over us waiting to take our order as soon as we sat down was a bit weird. But it was all good.

Back the hotel. Mailei and I crashed but the girls had other things to deal with. Before they could catch up on some z's, they had to kick out two intruders out of their room. Not people but two massive cane spiders. They need to work on their terminating skills 'cause both spiders outsmarted (is that a word?) the girls and escaped into the shadows of the room. Tonight the girls slept with spiders (gulp).

I personally discovered this beach back when Mailei and I had the 'Yoga Moms' group a couple years ago. Balangan Beach is located to the north of Padang Padang Beach and takes about 35 minutes by car from Padang. On the way to the beach, the cd in the radio played this full version song of an old Coca Cola commercial. The genius behind the song should be making millions. As soon as I was able to order a Coca Cola, I did! Okay, now back to the story.

This is the beach where I take groups of surfers or bodyboarders for the first time. It's a great wave to get an idea of the skill level of the crew. But what I found out with the Yoga Moms is that it's also a great beach to just lounge and explore. But I have to say... for me to 'just lounge' on a beach is really really tough to do. If I'm on the beach, I have to be doing something. Building sand castles, playing soccer, something! I start twitching after 10 minutes of 'just lounging.' Apparently, some people love to just chill on the beach with a cold drink in hand. Balangan is perfect for that!

Before we headed down the beach, the girls got a one hour full body massage for about $15 at the La Joya Bungalows hotel/resort. Yes, the massages are that cheap everywhere on Bali. I know... insane! Now, time to get to the beach.


There are about 10 or so warungs (restaurants) on the beach. We found Jimmy's Brother's Warung to be our favorite. It's located down near the cliffs. The food is awesome and Koman (she's your host, chef and masseuse) takes great care of you. The nasi goreng is awesome but my favorite is the chicken burger. Chowing down on the grub overlooking the beach was epic. Luna is the dog that hangs out at Jimmy's Brother warung and will eat anything you don't. I mean anything! She'll love you for it.

The girls decided to spend the sunset exploring the cliff side of the beach while I passed out on the lounge chairs. The tide was low enough for them to walk around the rocks and explore the tide pools. I woke to the sun just setting and their return from the cliff.


Back to the hotel for sushi and pizza. Oh, I think I forgot to mention, LBS Surf House now has free wifi for those that stay or eat there. Awesomeness!

Fourteen hours to your connection in Asia then another four hours to Indo... the amount air travel takes a toll on your body. So today, we take some time and decompress on the white beaches of Balangan.

Mailei and I have been here for the past couple days and I'm still jet lagged waking up 3am. But soon enough, we'll all be on the same time zone.

I was able to get out into the water yesterday morning but holy shit... jelly fish took over Padang Padang. Everyone that went out without a long sleeve got munched on. But it was worth it.

We're off to the beach. More photos soon.

From Bali... but first this.

I just got into Bali yesterday afternoon. So I have yet to take any photos but they will come. I'm going to use my blog to keep you updated on the happenings from Indo.

But first, I want to say thanks again to the awesome production crew that is working hard behind the scenes on all the IBA World Tour GSS events. Pete, Pat and the boys are killing it. They are a cool ass production crew from Australia that go by the name: www.snakesandladders.tv. Pete snapped this pic of me in Chile. Love it. He's one of the few that still shoot film as well as digital. Thanks for the photo. Pete has another gig that his moonlights with... check it: www.goonforhire.com.

Stand by for updates from Bali. 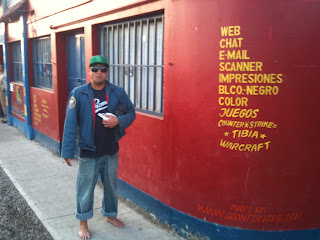