The Day Before and The Day Of... the First Day

I downloaded the Blogger app on my phone, spent a ton of time typing up what went down yesterday only to have the app say publishing since last night! So let’s back track a little to a yesterday then I’ll fill you in on what went down today.

It was Monday morning when I woke up at 11am! I never can sleep past 6am at home. But being jet lagged and having a late night beer with the production crew at 2am didn’t help.

I took my time getting ready to hit the road to the comp site. I asked Dallas Singer (my roommate) to take my backpack as I opted to swim the mile or so in the ocean over to Praia Grande. The conditions were perfect. 4pm and glassy. I made the swim in good time. The south current helped. My wife would be proud.

I hung out a little more than headed to the Mar Bar for the opening ceremony of the event. Before it all went down, I chilled out with the guys from the Azores and Morocco. The organizer and an official from the city were on hand for the ceremony. After all the official business was done it was time for the first night of the four day video premieres. Elmo from Rideitt.com organized the awesome four day showings. Epic idea. I hung out as long as I could until I had to leave to try to get some sleep. I got a lift home from some friends I met last year.

And in typical fashion, the entire production crew were awake at midnight on their computers working in the lobby. I sat down and did a few emails and made up the schedule for commentators then off to bed.

This morning, I woke up to Tezza’s loud voice. It was 7am and I was supposed to leave in the car at 7:30! I got up, showered and got dressed as fast as I could. When I got down in the lobby, everyone was still there eating breakfast. Relief. I can stop stressing now.

Did I mention, I miss my wife? We just got a new place and I ‘m not spending it with her, argh!

Okay, so today was the first day of the comp and we were going live. We went through the motions of the live feed all day. We usually don’t run the live feed during the trials. But we all were here and so we went for it and worked out any and all kinks. Next thing I know, the sun is setting and the comp is called off because of the glare. It was almost 8pm! That’s some crazy hours at the office.

I got the schedule for tomorrow dialed in and headed back to the Mar Bar for a drink and to see Elmo. I met a cool guy named Joao and his wife and they ended up giving me a ride back to the hotel.
And now I’m back in the lobby ready to pass out. See you tomorrow.


Photo Gallery by QuickGallery.com
Posted by In The Water at 3:26 PM No comments:

Get ready. I'm putting aside a hour or so to give you my personal updates from here in Sintra, Portugal. So here we go...

I'm writing from a very warm lobby of our hotel here in Praia da Macas; just a couple kilometers from the comp site, Praia Grande. It's about 3pm. Yeah, this morning was the first time that I slept in 'til noon. It wasn't because I had a late night beer with the production guys that rolled in from the airport at 1:30am. It was the jet lag that wasn't letting me sleep.

I flew in yesterday morning around 8am and had to stick around a couple hours for Laura who's working camera three. Seamus grabbed us in a sick nine passenger van and we were on our way. 45 minutes later, we rolled up to our cool hotel. It's an old 1800's home that has been transformed into a quaint hotel right on the beach. Epic. I needed a room with a view. Didn't matter if it were of the beach or not, any view here is awesome.

Like most bodyboarders, the first thing we have to do it jump in the water. So I unloaded bags in the room and jumped in. I trunked it and that was the first time, I've been cold in a long time. Met a few bodyboarders out there, caught a few waves and that was enough to get a feel.

Organized my stuff in the room and went down stairs for a beer and pizza. Came back to the room and passed out. I think that's where I messed up and carried on my jet lag. I woke up around 5pm and had a few beers with Shamo on the balcony then we headed to Bar Mar at Praia Grande for the openning ceremony. Met Elmo, Renato and a few other guys. We got there too late for the ceremony though so decided to have a beer and bail. Nex thing you know, we're doing a practice run with Flip Cup against the Venzuelans! What!? So after a couple beers, I was done. I had to get home. Shamo and Laura took off to pick up the production team from the airport earlier. I asked a couple heads for a ride but nothing. I began the 30 minute hike back home. It was good. Got to work out the beer and fried food.

Got back and heard commotion going on and it was the production team going for a beer to celebrate their journey. I was up so had one last beer with the crew. Finally, good. night.

Props Are Due. Damian Davila

I met this kid about... oh man, a long time ago; back when he was a super bodyboard grom. He's from Rosarito Beach, Mexico. It's about 25 minutes south of the border.

It was back in the 90's when I met up with him and the other Rosarito boogie rats and we'd ride the empty beach breaks 'til we were hungry. Then we'd get out of the water and eat some tasty tacos for fifty cents each! Ah, the good old days.

I lost touch with most of them but I knew that Damian was in a punk band. He later told me that he toured all over Europe. Yup, a real life rock star. We linked up again late last year and he was interested in coming to Cabo Freak Fest 2012. Not only did he show up but he had the time of his life, took the Freak of the Week Award and grabbed some sick shots along the way.

Not exactly sure when he picked up a GoPro but let me tell you... this guy has the skills to not only get the shot but also post process to make sure the colors are right. Very impressive.

Damian just opened up another one of showings down in Rosarito. I really wanted to go to the first night last night but I suck. After looking at the photos he sent over, I'm kicking myself in the butt for not going. Looks like he had an epic turn out and on behalf of all the 2012 Cabo Freak Festers, we wish you the best brotha!

His photos will be up in Rosarito for the next couple weeks then he's going to take them to another gallery in Tecate. Interviews and other cool stuff are lining up for him. We're stoked for him.

Whoa... the last month has been freakin' hectic. Just a quick summary... one week of madness with the freaks at the 10 Year Anniversary of Cabo Freak Fest, one week with my wife's father in town (that wasn't bad just busy), then two weeks finding and moving into a new crib. Wait... looking back, none of it was bad at all just super busy.

Mailei and I are finally settled into the new pad. Check the photo below. That's the new Manny V Productions office. I'm pumped. Now, I can leave work and come home (yeah, just a few steps away).

Now, it's time to prep for the Sintra Portugal Pro. It feels like a long time since the last IBA event. The next couple days I'll have to brush up on stats with Steve Action Jackson.

Oh, I forgot to mention... during the month long marathon I was able to sneak in a couple video shoots, a few photoshoots and a few SUP sessions. The waves weren't big enough to bodyboard. I need something in the 4 foot and above range to move my fat ass. Yes... it's been a very busy month.

2012 was the 10 year mark for putting together Cabo Freak Fest. That is, after PAB's initial three year run before heading over to ESPN X Games as a commentator. For making it to the 10 years, I brought back some of the old school games and competitions and added a few more for fun, of course.

I'm happy to say that Cabo Freak Fest 2012 went down in true form. I'm going to write a full story and use mine and Don Nguyen's awesome images for a full on feature in the next BBRmag.com issue. I'm not going to leave anything out in the story. I may get in trouble for it. Okay, I may leave a few things out. I don't want to get anyone in trouble.

If you want to see what you missed, check out some of the images on my photo website: www.mannyvphoto.com and look for the FFATtrips category.

One last thing... thank you. Thank you. Thank you to all of you that have made it to one or more of this unreal bodyboard slash party trips. I will never let her die. But I may bow out of a few of the competitons; starting with the milk drinking contest. Enjoy. 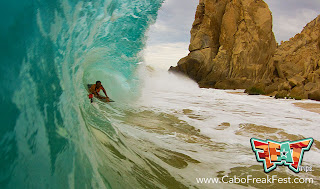