From My Point Of View

Has it really been over two weeks since my last post!? Apologies my friends. Let's get back on track.

As some of you may or may not know, I spent the last couple weeks in the Canary Islands; specifically Gran Canaria. I was hired to commentate the first ever international bodyboarding event at the infamous El Fronton. This wave is by far the most perfect bodyboarding wave on the planet. The reef makes the wave come together and create perfect barrels and perfect wedging ramps. So deep barrels and high flying acrobatics are the norm at this place.

The Wild Wild Wave El Fronton Invitational was streamed live via RedBull.com's satellite. It was the first time in history that Red Bull has broadcasted any type of bodyboarding. The event was spectacular. But the one thing that I came to realize as the event started was that I was not going to see the event live myself! Yes, I was on the beach but my job as the webcast commentator was to give the play-by-play one or two seconds after it had actually happened! I had to keep my eyes on a monitor that you and all the viewers were watching. So essentially what you were seeing live, I was seeing live as well. The cool part about it was that I was the only one to watch all the replays. But on the other hand, I couldn't give you the up to the minute scoring. The scoring machine was not hooked up to our area or monitor. That will be remedied for the Pipeline Pro event come February 15th. Make sure you watch.

2011 is going to be pretty hectic. I'll be following the entire IBA Grand Slam Series Bodyboarding World Tour as the webcast commentator. Please tune in and watch all the events live. I'll be coming at you from Hawaii, Chile, Australia, Mainland Mexico, Reunion Island and the Canary Islands. Oh yes... very hectic.

From Cabo, my R&R retreat,
MannyV 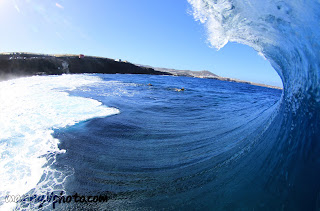 Email ThisBlogThis!Share to TwitterShare to FacebookShare to Pinterest
Labels: IBA

Good friend and world class surf photographer, Jeff Flindt, came to visit with his wife Caroline last month before heading to Hawaii for the North Shore surf season. Jeff has put in some serious time in the water photographing the best of the best surfers in the world. For good reason... he's good at it.

I got to picking his brain about all the new young photographers that are now able to pick up a sick camera and water housing set up with the help of the bank, mama's check book and/or hard work. I asked what's it like in heavy line ups like Pipeline, Backdoor and other well-known spots. I was wondering if there was any 'localism and respect' things going on with the veteran water photographers and the new schoolers.

Before we get into his answer, I'd like to touch base on the whole respect thing and riding waves. It's really simple. Respect those that have put in the time at the spot or call that wave their home. Don't drop in, don't back paddle and don't call them off waves. Well, there's a point where you obey all the unwritten rules of the water and the locals still give you a hard time and you've had enough. That's a whole different topic. We'll come back to that in another blog post. Back on track... okay, so respect and know your role. In other words, if you're a beginner, stay in the beginner's zone. Don't go to the peak. Wait in line. We've all witnessed the newbies going straight to the peak and drop in on locals, fall on the take off and shoot their boards. Uh, not good. Respect.

Now, on that note. Flindty (what his old bodyboarding friends call him) told me a few stories about young newby water guys that would not respect the likes of Hank, Bielman and many other famous and respected water photographers and go for the best position in the water. Needless to say, a hail storm of bad words and angry looks hit the newby like a ten ton truck. Not knowing exactly what the he was doing, the newby paddled away. So there is a respect factor in water photography that is unseen by the majority of people on the planet. In hopes of finding a photo to demonstrate my point of view, I found at photo on www.tommyschultz.com that shows two photographers shooting a jackass surfer doing exactly what he's not supposed to be doing. (Side Note: Apparently, the surfer is a 'full-on local' and can drop in on anyone. I stand corrected. Read comments below.) Okay, back to the topic at hand... But you'll notice that angle of the photographers' line in relation to the wave and surfer. They're not directly in front of each other. This angle is the angle that all professional water surf photographers abide by to ensure the chances that the photographer in front will be out of the way and in the wave's face by the time the surfer reaches him/her. Yes, the photographer in the front will and should be the 'local' or 'respected' photographer. Jeff went on telling me a few more stories but they are reverted to the newby getting schooled in respect.

One last thing... surf photographers are sitting on thousands of images that most of the public will never see. The reason? Protecting local spots. The background in the photo below has be altered to help disguise the location of this spot. But it's such a great photo, I had to share. Shit, maybe I should take my name off it, eh?