First Time For Everything

Finally! I've been shooting for the past four years or so and I'm loving every minute. With some of the top surfers in the area as my friends, it was just a matter of time before I get a photo in a surfing mag. I've gotten published in a bunch of bodyboarding magazines all around the world but I really wanted to get a shot in a surf mag. Not only will I get paid but it's also to prove that I can do this at a professional level.

I've been fortunate to travel and watch one of the surfing world's top photographers, Jeff Flindt. Seeing how regime the entire process can be, including the post processing part, I have to say... learning from the best helps. Flindty wasn't the only one that I've seen in action. As a professional bodyboarder from 1990-1998, I've had to the pleasure to shoot with some of the legends: Aaron Chang, Chris Van Lennop, Hank, Aaron Lloyd, Bielmann... the list goes on.

I give all these photographers 110% props. All these guys, not only paddled out in heavy surf, but after every 36 photos, they had to paddle back in and reload the camera with a fresh roll of film. Then they paddled back out for more. Unreal. I hope the new up and comers understand that having the numbers 999 show up in the photos remaining display is a pleasure that we all should appreciate. I know I sure the hell do.

So, I did it. I made it into a surf mag. Sure it's a small ad pic but it's all good. Check it, here's a mock up of the ad that Sean Fowler's sponsor SRH used in a recent Transworld Magazine advertisement. I have yet to get my hands on a real copy but I'm sure it's the same ad. Good times.

PS: I just got word that SUP Journal will be running a photo of Sean Poynter that I took. Amped! I'll get that posted as soon as I get my hands on that issue that's due out in October, I believe. Plus, that'll help me out with my new FFATtrips.com trip... SUP Mex. 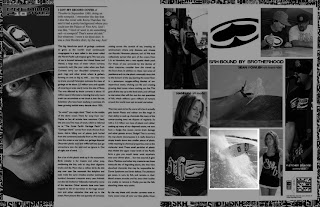